Imagine a Caribbean island with hiking trails and adventures comparable to the best in the world. Seems too good to be true, right ?  After all, the Caribbean is all about beaches, isn’t it ? On the nature island of Dominica, outdoor lovers and adventurers can explore vast swathes of pristine tropical rainforest, discover majestic waterfalls, climb mountains, hike through an active volcanic caldera to a boiling lake, rappel through deep river gorges, and even trek a 200km national trail. All on one Caribbean island? Amazing, right?

Here are five Dominica hiking adventures that will – quite literally – leave you breathless.

Dominica’s signature hike is the Boiling Lake Trail. It’s a full-day, there-and-back challenge that takes in rainforest, a mountain peak, an active volcanic caldera, and warm water rivers and cascades.

The hike starts at TiTou Gorge (home to a waterfall and some great canyoning adventures) and heads into Dominica’s densely forested interior. This beautiful and remote wilderness is part of the Morne Trois Pitons National Park, which is a UNESCO World Heritage Site that is noted for its dense cluster of volcanoes, and its variety of natural habitats and attractions.

After climbing and then descending Morne Nicholls, hikers must negotiate the spectacular Valley of Desolation – a volcanic landscape of steaming fumaroles, hot bubbling mud, and warm water rivers. Getting up close and personal with nature is what Dominica is all about, and what could be more thrilling than trekking through an active volcano !

Dominica’s Waitukubuli National Trail (WNT) is unique. It’s a 200km hiking trail on a single Caribbean island. Seriously, how cool is that?

But don’t worry, you don’t have to walk all 200km at once! The trail is made up of 14 segments, all of which can be hiked as individual trails. These segments all have their own characteristics and may include forest, mountain, river, coast, farmland, and village. Many follow historic tracks and have strong ties to Dominica’s cultural heritage.

Here are a few of the more notable – and sometimes notorious – segments:

WNT Segment 1: The Morne Crabier Trail - a tough introduction, with a steep climb to the top of Morne Crabier where you can enjoy awesome views of the Cachacrou isthmus, the Soufriere Bay fishing villages, and marine reserve. You can even see the French island of Martinique. 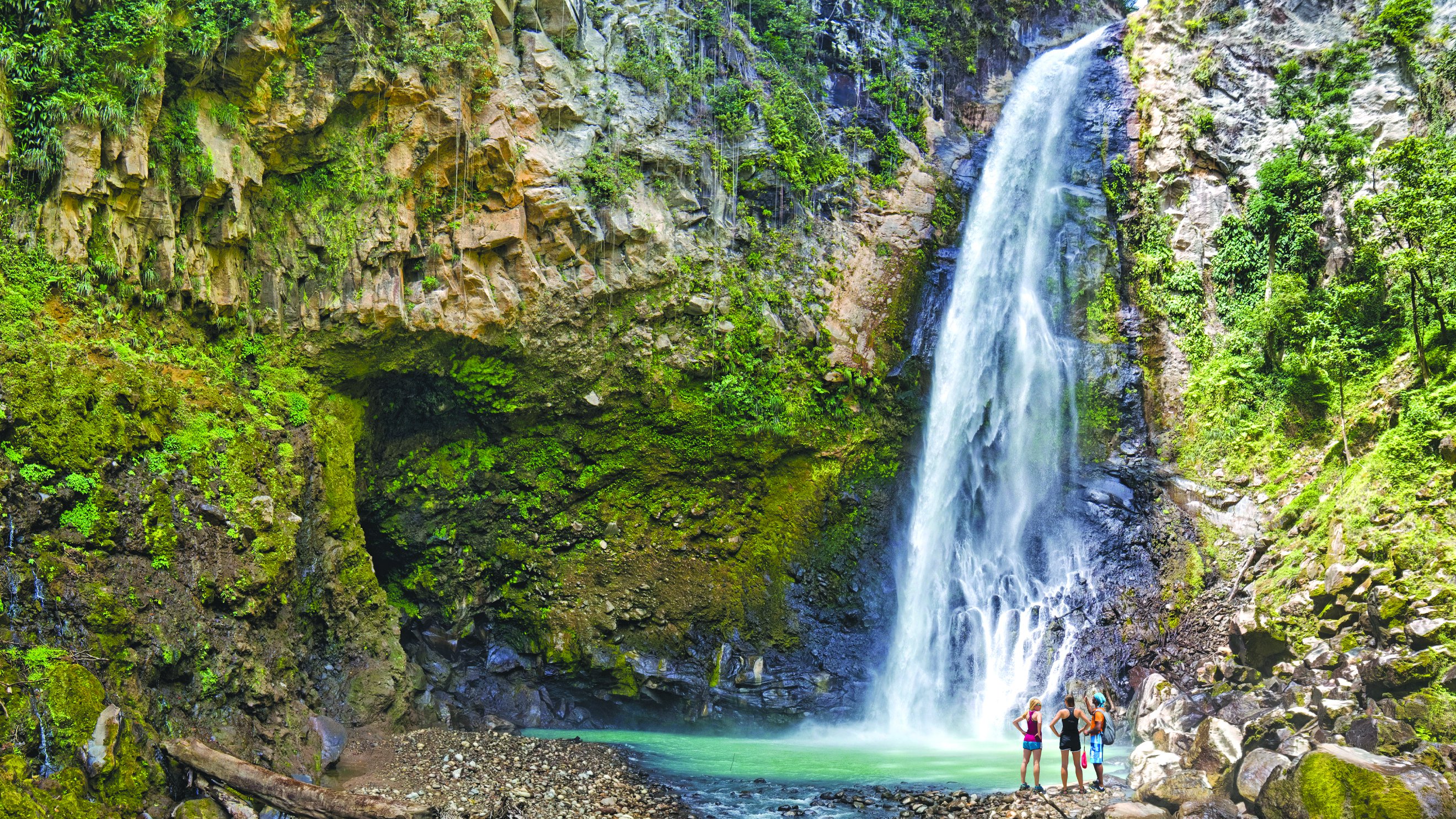 WNT Segment 3: The Mountain Villages Trail – a farmland and village hike that skirts the peak of Morne Anglais and takes in the flower village of Giraudel, the hot volcanic spas of Wotten Waven, and the spectacular views of the volcanoes of the Morne Trois Pitons National Park from the Morne Prosper ridge.

WNT Segment 6: The Kalinago Heritage Trail – a full day hike through the villages and the heritage sites of the Kalinago Territory. Home to descendants of the Caribbean’s first people, this trail is educational as well as scenic. Hikers can learn about canoe building, cassava bread making, basket weaving, and much more. The hike also passes through the Kalinago Banara Aute which is a replica village of thatched ‘karbet’ and ‘ajoupa’ buildings. A steep ascent of Horseback Ridge rewards hikers with sweeping vistas of the Territory and the rugged Atlantic coastline.

WNT Segment 8: The Cross-Island Trail – the National Trail’s most notoriously difficult segment is a hike across the island from east to west, passing through primary rainforest, crossing turbulent rivers, and climbing up and down a steep mountain. Look and listen for parrots, agouti, perhaps even wild pigs. Without doubt the most remote and pristine wilderness in Dominica, this is a demanding but hugely rewarding hike for intrepid adventurers. Learn more about the WNT here.

How about an exciting adventure that combines hiking with canyoning? The TiTou Gorge Canyoning Trail is an opportunity to do just that.

The fun begins with a rappel down the side of a waterfall into the river gorge. From there, you follow the course of the river as it twists and winds its way down the hillside. The canyon walls that rise up on both sides are beautiful, sculpted into smooth shapes by thousands of years of water. Hanging down from the top of the gorge are the roots of trees and long liana vines. It’s an incredible feeling to be beneath the forest floor, completely hidden from sight.

The trail meets several more waterfalls, all of which must be negotiated by rappelling down them. Other times, you encounter cascades and deep, gin-clear pools which you jump into and swim across. The river trail ends at Cathedral Canyon; one of the most beautifully natural places in Dominica. The canyon and subsequent hike out of the river mark the end of an unforgettable adventure. 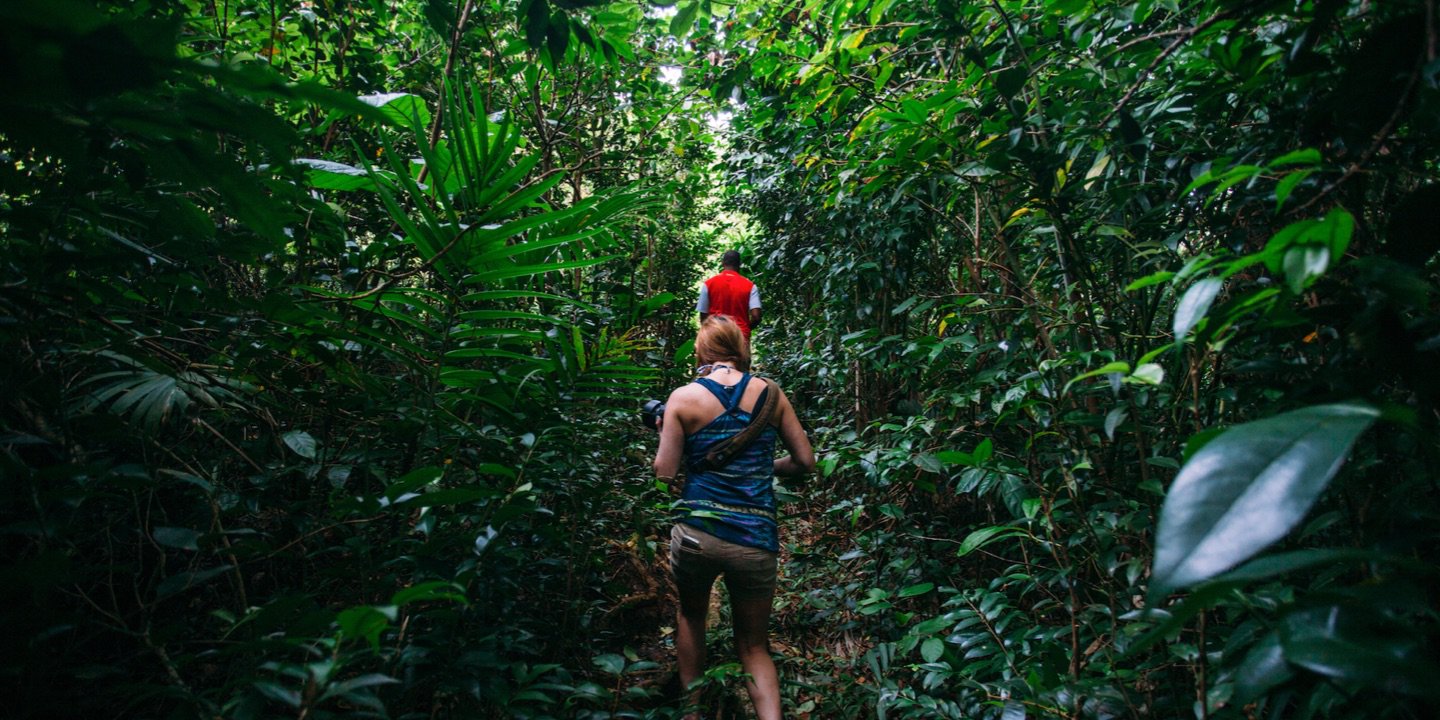 Dominica has several river gorge trails, all with different levels of difficulty. No experience of canyoning or rappelling ? No problem. Your expert canyoning guides give you all the training and equipment you need before you set off. And if you are an old hand at this kind of thing, advanced trails end up at the magnificent twin falls of Trafalgar. Stand at the top of these waterfalls and enjoy a view that few others have ever experienced. Then rappel down! Learn more about canyoning the Titou Gorge here.

In the 18th and early 19th centuries, Dominica was a colony of the French and then the British who brought enslaved people from Africa to work on their sugar and coffee plantations. Some of the enslaved escaped and ran away into the densely forested mountains of Dominica’s interior. Known as Maroons, many had hidden encampments led by enigmatic chiefs, the most famous of whom was called Jacko.

Jacko’s camp was on a high plateau in the Heart of Dominica, protected by steep cliffs and thick forest. On one of the cliff faces, the Maroons cut a long series of stone steps that connected their camp to the Layou River. Eventually, the British militia discovered the camp, and, after a bloody battle, the maroons were overrun and many, including Jacko, were killed.

The location of the camp, now known as Jacko Flats, and the Jacko Steps are an integral part of this important heritage trail that also includes a hike in the Layou River itself where there is a waterfall hidden away in a conical canyon.

Sounds awesome, right? Well, it really is. Jacko Steps is a world-class forest, ridge, and river hike that runs in a loop from and back to the village of Bells. It’s a highly symbolic trail that sparks the imagination and helps us to remember those who put their personal and collective freedom above all else, no matter the danger. Learn more about the Jacko Steps Trail here.

Morne Diablotin is Dominica’s tallest peak and an awesome mountain climb, but Morne Anglais (the fifth highest) is a particular favourite – perhaps because it’s one of the easier mountain hikes, but also because it has fantastic views, guaranteed.

Beginning in the flower village of Giraudel, it’s a steep climb up the mountain through rainforest and montane thicket. Following a very narrow ridge, with steep drops on either side, you find yourself looking down on soaring hawks and squawking jaco parrots.

From the top, hikers are rewarded with views of the east, south, and west coast of Dominica. If it’s a particularly clear day, you can even see the French islands of Guadeloupe and Martinique. Volcanoes are also in view – the southern volcanoes of the Morne Trois Pitons National Park, as well as Morne Diablotin itself, all the way in the north.

Thankfully, Giraudel has no shortage of bars where you can reward yourself with a cold beer or a rum punch after your mountain hike. Learn more about the Morne Anglais Mountain Trail here.