Dominica is known as the Caribbean’s nature island for many reasons, and one of them is the healthy and delicious food that is all part of life here. Whether cultivated on fertile farmlands or caught in sustainable ways from the sea, Dominica’s nutritious cuisine is notable for its freshness as well as its long tradition.

See it being grown and harvested on a farm tour. Meet the farmer and learn about Dominica’s fresh produce and traditional bush medicines. Take a fishing trip. Tour the island eateries and high-class restaurants or come at festival time when heritage food is on the menu. 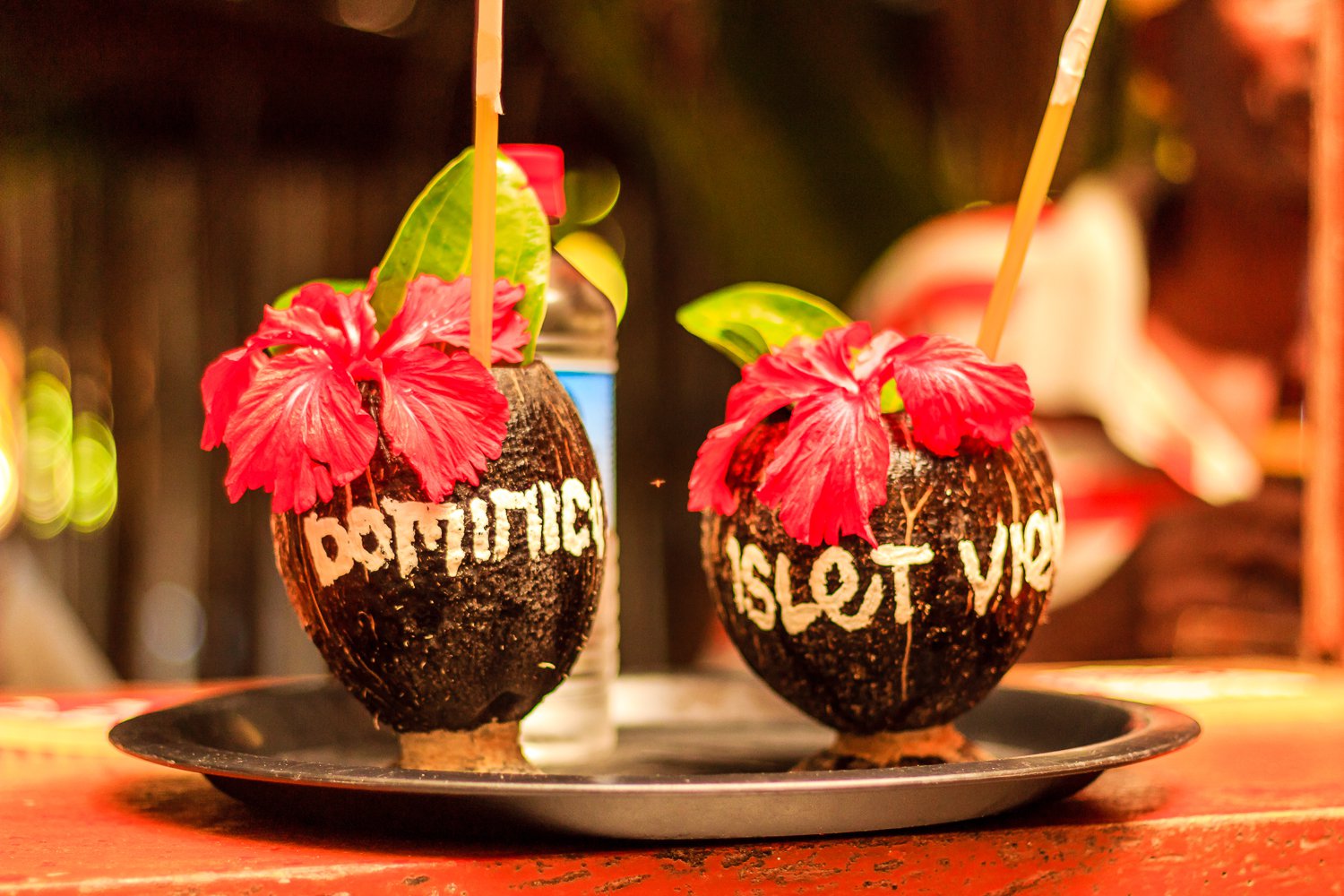 As a developing climate resilient nation that is focused on future food security and the health of the population, Dominica places great value on growing what it eats and eating what it grows.

On the Farm – Growing Great Food

Everything starts on the farm. In Dominica, that farm could be located in a backyard, on a steep ridge, or at the end of a long and winding mountain road. Farming is part of Dominica’s heritage: beginning with the Kalinago and their predecessors and continuing with the provision grounds of the enslaved. In the latter half of the 20th century, there was a banana boom. Everyone grew bananas, and ships left for Europe stuffed full of them. However, when subsidies for small island growers were removed under World Trade Organisation rules, the banana bubble burst and many farmers struggled to make ends meet.

Nowadays, Dominica’s farms are more diversified, growing a variety of crops, depending on their size and location. Most people have a ‘garden’ of some kind where they grow food either for themselves, or for trade. Some farmers still commercially cultivate bananas of course, and the northeast of the island in particular has a number of large plantations. But farming has also had to adapt to the impact of climate change, natural disaster, and the pressing need for food security. It is now a blend of the modern and the traditional, and farms of all sizes are growing a wider variety of produce than ever before. 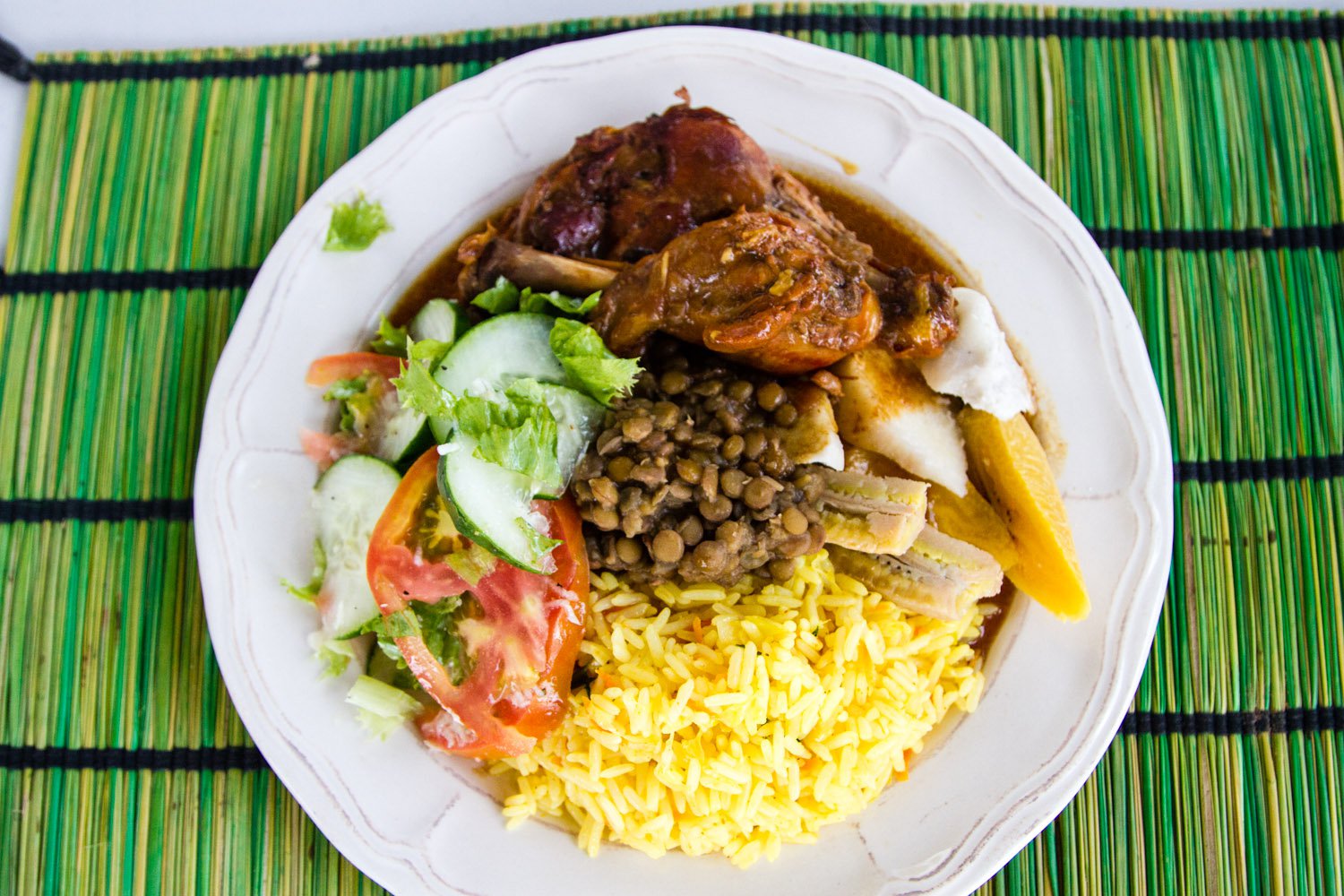 Cultivating your own food is a trend all around the world, and Dominica’s farm tours are increasingly popular with visitors to the island. Wandering around a Dominican farm in the company of the farmer is fun, educational, and inspirational. Visitors can see, touch, sample, and learn about produce that is either new to them, or which they only know from their local supermarket. Seeing this produce cultivated at source, in the company of the farmer who grew it, can be a lifechanging experience.

Many farmers are also well versed in the use of plants and herbs as traditional medicines. Handed down through generations of people of both Amerindian and African descent, these ‘bush medicines’ and ‘bush teas’ are still very much part of Dominican life. Ginger and garlic tea for a cold, guava leaf tea for an upset stomach, soursop leaf tea to help you sleep, peppermint tea for a headache, and so on. It’s food for thought for anyone who has not grown up with these traditions.

On the Ocean – Catching Fresh Seafood

Amerindians arrived in the islands of the Lesser Antilles in their dugout canoes and were excellent fishermen. In Dominica, some of the coastal settlements they established still bear their names: Coulibistrie, Colihaut, Boetica, and others. Today, all of these coastal villages have their own small fleet of fishing boats – now mostly with outboard motors, though some still use paddles.

Inshore fishermen tend to use seine nets and handmade fish and lobster pots, whereas those who hunt on more distant fishing grounds tend to troll with long hand lines.

The most commonly caught fish are tuna, mahi-mahi (also known as dorado, and in Dominica as ‘dolphin’ or dowad), marlin, and occasionally, wahoo. Inshore fishermen tend to catch smaller reef dwelling fish such as jacks, grunts, and squirrelfish, though barracuda and red snapper are also landed. 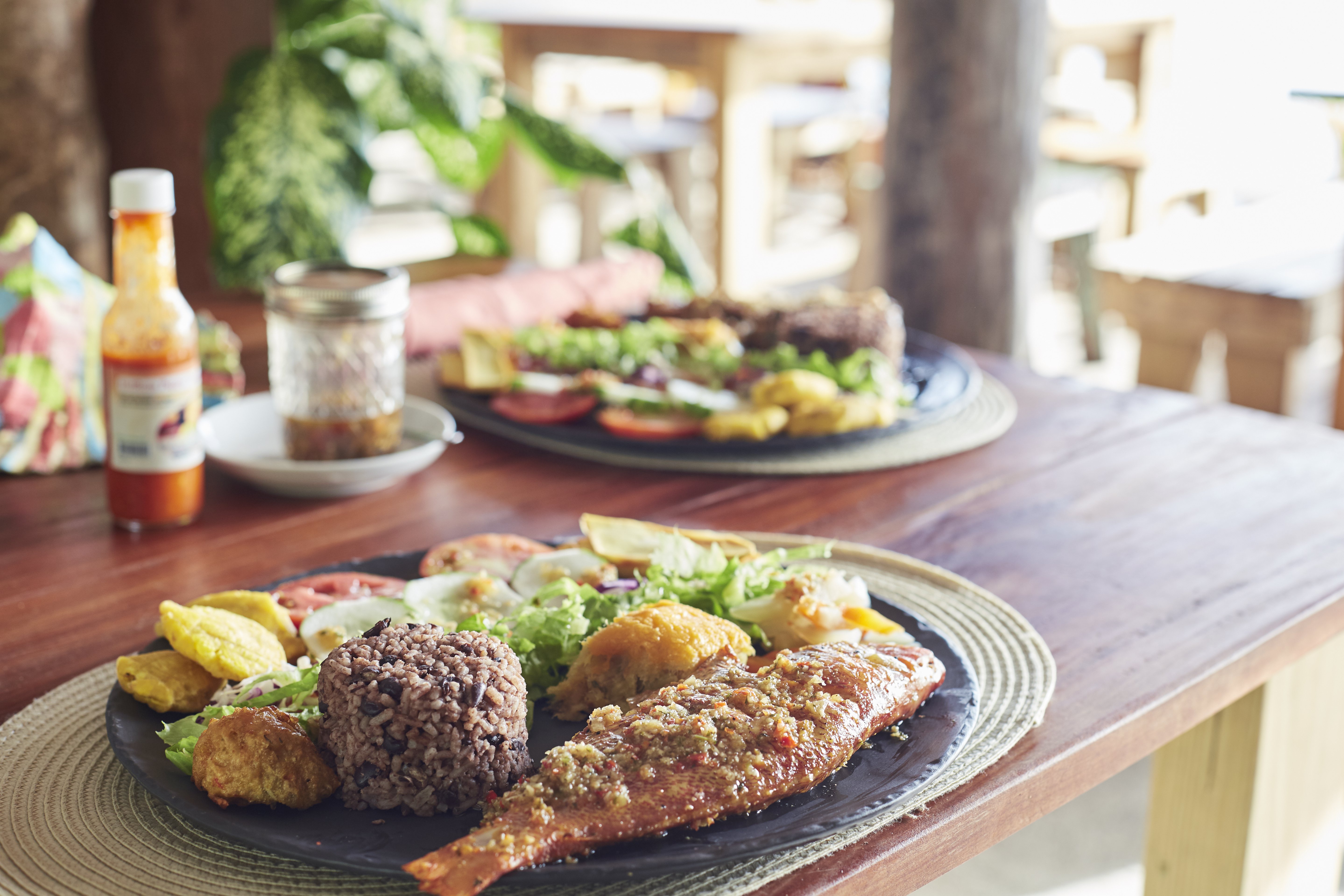 In September and October each year, the men and women of Layou village on Dominica’s west coast, will net titiwi, a juvenile goby that hatches in the sea and then spends its life swimming upriver where it will eventually lay eggs in a mountain pool. The eggs are then transported with the current all the way back down to the sea where the cycle begins again. The titiwi arrive in the river mouth in large shoals, usually starting in September and often after a lightning storm. Some are caught in the early hours of the morning and become the key ingredient of titiwi ackra – a spiced fritter that is traditionally eaten during the Creole season.

Whenever you visit Dominica, there is always fresh fish and lobster on the menu. Listen out for the sound of someone blowing a conch shell. This means fresh fish is for sale.

At the Market – A Cornucopia of Fresh Produce

Fresh produce markets are usually open all week, but the prime times are Friday evenings and Saturday mornings. This is when farmers and hucksters fill market stalls with colour and vitality. Most Dominican villages have a fresh produce market of some kind. The largest is in the capital, Roseau, on the northern edge of city near the river mouth. 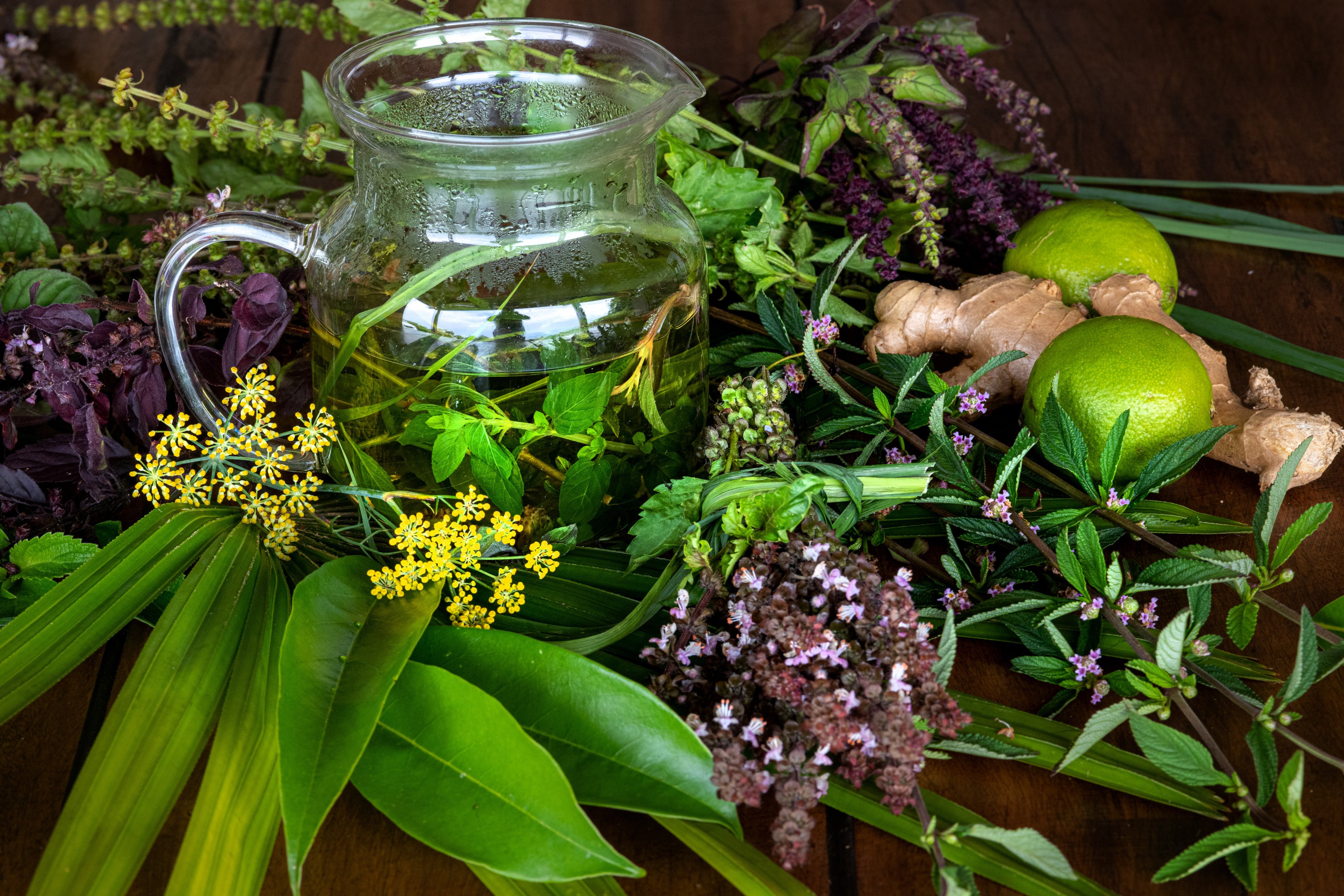 Staples are traditional ground provisions such as yam, dasheen (taro), tannia, other eddo varieties, and sweet potato. These are energy food types; subsistence crops whose cultivation probably began in South America and migrated to the Antilles with Amerindians. Also grown on the provision grounds of the enslaved, they were an important food source - either roasted or boiled in a large pot with seasonings and any scraps of meat and fish that were available. This one-pot braf (broth) is a much-loved dish of the modern Dominican kitchen.

At the market you will also come across large bunches of green bananas (known here as ‘figs’, which can be confusing) usually boiled and eaten as a side or part of the one-pot braf. There will also be ‘hands’ of plantain, which is similar-looking to a banana, but which has to be cooked (boiled, roasted, or fried) before consumed.

Fresh fruits usually include lime, grapefruit, orange, guava, passionfruit, pineapple, and watermelon. You will find common vegetable and salad crops as well as seasonings such as celery, chive, garlic, parsley, and peppers which are essential ingredients of all Dominican cooking. 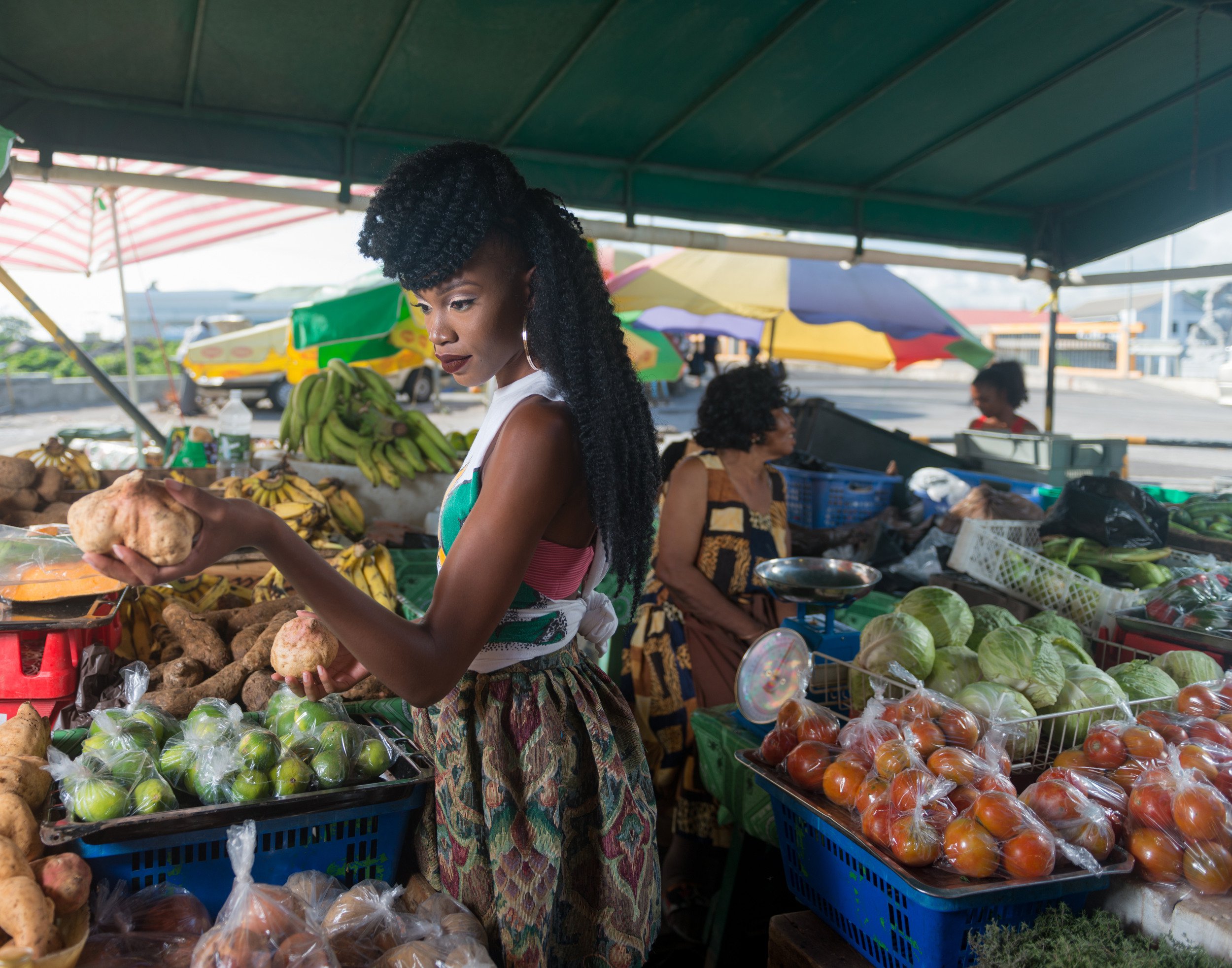 At the Restaurant – Culinary Delights

Dominica’s eateries come in all shapes and sizes: from roadside barbeque stalls and snackettes to the haute cuisine restaurants and bistros of eco-luxury hotels. The menu is equally diverse: from stuffed bakes and roti to grilled lobster and tenderloin.

Cultivated in mineral-rich volcanic soil, ground provisions, fruits, salads, and vegetables keep dishes healthy and vibrant, often served together with ubiquitous Caribbean favourites such as rice and peas, baked macaroni and cheese, and fried plantains. A traditional lunch could include many or all of these things, presented with grilled or steamed fish, fried chicken, stewed pork, or perhaps curry goat. Lunch is designed to fill you up and it certainly does! 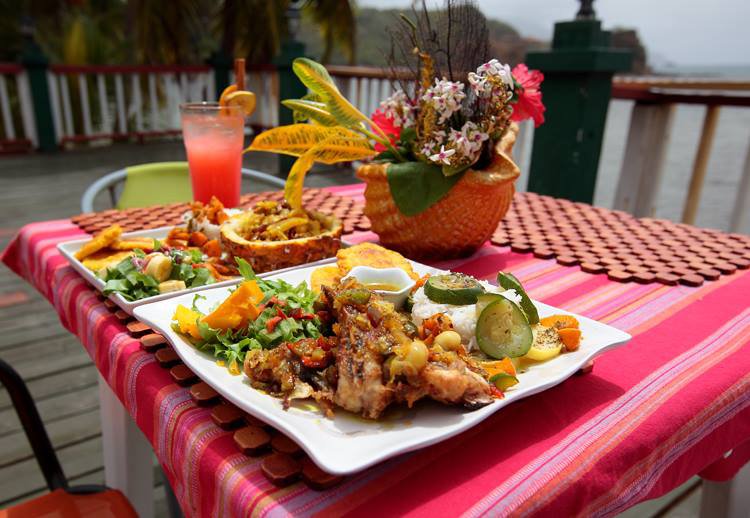 Made from young dasheen leaves and coconut milk, Dominica’s national dish is callaloo soup. It is often served with land crab during the Creole season (October). It is one of several heritage dishes that include crab back (spiced land crab meat cooked and served in its own shell), stewed agouti, goat water (goat meat soup), chatou water (octopus soup), codfish sancoche (codfish in coconut milk), and pelau (a heavily seasoned rice dish, made with chicken, and sometimes other meats).

A traditional Kalinago dish is cassava bread. This is a flatbread that is usually prepared with a mixture of spices and coconut milk and then cooked on a hot plate over an open fire. See it being made and try some for yourself when you visit the Kalinago Territory. Also look out for kanki, another traditional Kalinago heritage dish that is made with sweetened grated manioc (cassava) and spices, wrapped up and steamed in a banana leaf).

Whatever your reasons for tasting the Caribbean’s nature island, be sure to make food one of them! Explore restaurants in Dominica here.